The Storytelling Effect: Your Brain on Stories

To understand why Stories are so powerful, let’s first consider how our brain works and The Storytelling Effect.

When asked what he would be doing tomorrow, patient N.N. would always reply, “I don’t know.”

“N.N” could draw the Statue of Liberty and make a long-distance phone call. At first meeting he seemed cognitively functional.

But, like many patients of the patients Toronto Neuroscientist Endel Tulving was studying in 1985, N.N couldn’t recall anything about his personal life. Studies of damage to episodic memory were not new, but Tulving made some remarkable discoveries in a series of cases similar to N.N.

Tulving found that patients who couldn’t experience their past also couldn’t imagine their future.

Tulving them probed N.N to describe his mind state when answering the question, to which N.N answered, “It’s like being in a room with nothing there and having a guy tell you to go find a chair.”

Through imaging scans, Neuroscientists have confirmed Tulving’s observations: the areas of the brain we use for memory and imagination are identical. “Past” and “Present” aren’t anatomical constructs. In our brain, past and present are the same. Our brains cannot distinguish between the two.

So this what Storytelling does:

Stories connect an unknown future to a known experience. 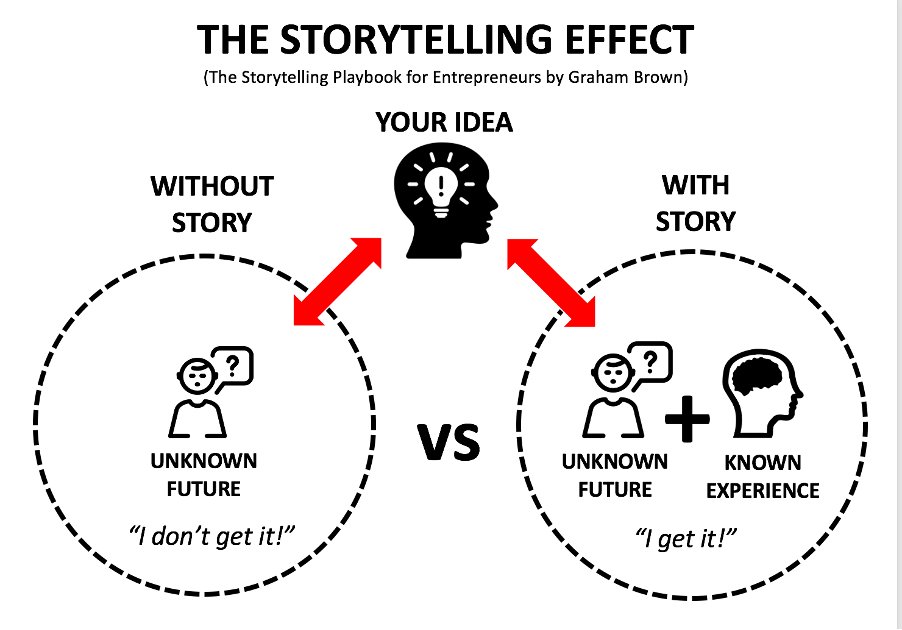 That’s why Storytelling is a powerful tool for Leaders. In times of great unknowns, when faced with crisis like now in the midst of a global Pandemic, we gravitate towards Leaders who offer certainty.

Churchill was a powerful storyteller. He used existing narratives to help his audience understand unknown futures. It’s said that Churchill succeeded in putting the English language to War, and in many ways his speeches were key to Britain’s ability to withstand German invasion in the 1940s.

In business, that “unknown future” could be investing in your startup, joining your team or buying your SAAS product.

When you are unknown, I will defer to inaction.

But when you connect the unknown to a known experience through Story, we feel we have experienced it already. It’s familiar and known. These experiences may be ones we have had in our own lives or those learned through the stories of other people.

As an entrepreneur your enemy isn’t inaction or lack of knowledge in your audience, it’s fear of the unknown. People don’t like the unknown. When presented with the ambiguous or unknown, people choose to do nothing.

You probably think investors make rational decisions about investments. This couldn’t be further from the truth. Like consumers, people buy on emotion and justify with logic. Logic has little to do with decisions in business, and if anything is used as a post rationalization of our decisions.

I’m not saying emotional decisions are poor decision. Far from it, but once you accept the power of emotion in decision making you also understand how to influence outcomes.

To illustrate this, consider in the next chapter how important it is to connect unknowns with known emotions

How to Build Personal Brand Authority. Storytelling and Strategic Narratives.

#The Story of The Asian Century

The Asian Century. The Rise of the Asian Middle Class. Asia to Asia Trade (A2A). Asia as a Service (AAAS). The Asian Startup Ecosystem.